When this years #VMworld party band was announced it seemed that only a few within the social network were as excited as I was: 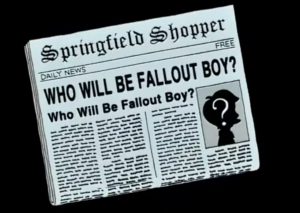 To be honest the music and sound of Capital Cities is something I am not too familiar with. But especially within Germany we know them because of this great Vodafone commercial spot  (well… I am kind of a romantic guy).

Bringing back the focus to the guys from Fall Out Boy. They were my absolute favourite music makers within the years 2008/2009 (Album: Infinity on High & Folie à Deux). Listening to their music helped me a lot during the first months at the university ;-).

Their mixture of rock, great vocals, cool lyrics and maybe the coolest and longest song titles ever made me a big fan. Since words cannot anyway describe the awesomeness of their music, I want to present you my 3 favourite songs of Fall Out Boy (those songs were created in a time where promotion over twitter was not title constraint ;-)). I hope those guys will rock the hell out of Las Vegas Motor Speedway on the 31th August (and perform those songs).

When VMworld will take place within the Mandalay Bay Las Vegas from 28th August to 1th September I am pretty sure a quote out of one Fall Out Boy song can be aligned to some of us there.

Here we go: My top 3 Fall Out Boy songs

2. The Carpal Tunnel of Love

1.  I’ve Got A Dark Alley And A Bad Idea That Says You Should Shut Your Mouth

Even though not in my top 3 I somehow like Fall Out Boys interpreation of Michael Jackson’s ‘beat it’:

I am looking forward to the event and meeting up with anyone reading this blog. Just ping me via twitter!