IMPORTANT: If you want to come it would be great if you sign yourself up in the doodle mentioned so I can make sure we have enough space/seats for our meet-up.

The decision was pretty hard to take since 2 dates had nearly similar amount of votes. The good thing is. Let’s double the amount of #vBeers. In the week of the 26th of September I deliver a Application Management in the Horizon Enterprise to selected VMware Partner in Unterschleißheim. Therefore we will definitely meet up during this week again (#vBeers Double Edition). 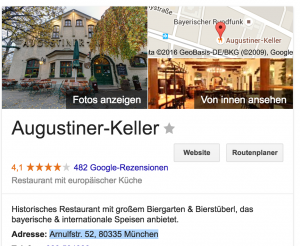 After the success of the first #vBeers I have organized in Munich, I want to meet up with friends & community geeks who are interested in virtualization & beer/drinks.

Since I moderate from time to time the (famous) #beer2b in the center of Munich, I realized that a lot of useful input/information/thinking can come up as soon as you talk to other people in the field in a relaxed atmosphere. This will be the second edition of #vBeers in Munich. We had a group of 10-12 people at our first gathering. Let’s see if we can keep up with the number.

Since VMworld US has just passed by and VMworld Europe is about to start in a few weeks, I am pretty sure we will find great topics for further discussions. 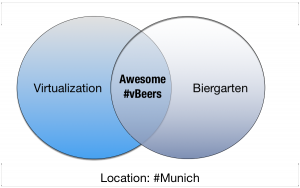 And since the ‘Oktoberfest’-season is about to start I just want to find out how many would be interested in such an event. For that reason I started a doodle poll where people can decide for 3 potential dates. If one date has more than 5 participants I guess we are good to go and I will organize a location and make an entry in the ‘official’ #vBeers library.

If you live in/close to Munich or will be in the city during those weeks, please participate or spread the word with your Munich colleagues and friends.

Please keep in mind that this will be a non-sponsored bring-your-own-wallet event. –> No Sales, just pure good old technology-stuff and fun… –> But if you know or can sponsor this event ;-) just contact me and we can figure out the details